Sawfishes are the members of the Pristidae family. They are related to sharks and stingrays. They are found in the Atlantic, Indian, and Pacific oceans. They are easily recognized by their long saw-like extension called a rostrum which is elongated into a long flat blade with teeth of uniform size deeply embedded on each side. Five small gill slits on underside of front half of pectoral-fin bases, not visible in lateral view (side view) distinguished them from another almost similar family, the sawsharks (Pristiophoridae).

Sawfishes are slow but strong-swimming bottom-dwellers. They are found on soft mud or sandy bottoms, in warm-temperate to tropical shallow, inshore continental waters, often in muddy enclosed bays, in estuaries, off river mouths, and off large continental islands, and in fresh water in rivers and lakes. They feed mainly on invertebrates and small schooling fishes. They use their rostrum to find prey as their eyesight is poor. The sharply-toothed saw are swung at their prey, stunning or killing they prey which they then devour.

There are 2 genera and about 4 valid species worldwide. 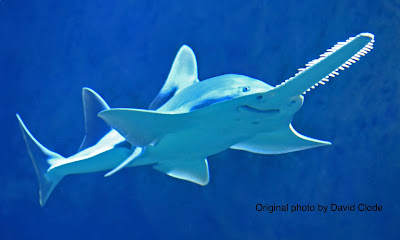 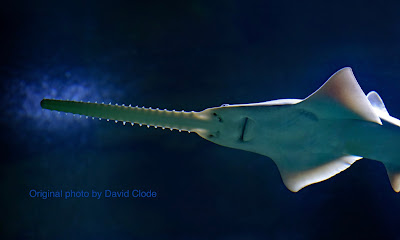