Indo-Pacific sailfish (Istiophorus platypterus) are the fastest fish in the ocean and considered by many as the ultimate game fish. They can dash in a speed of up to 110 kilometers per hour (68 miles per hour), which is the highest speed reliably reported in a fish. Their amazing speed and acrobatic tail-dance pose a great challenge and excitement to anglers. Their meat is tough and not great to eat, but they fight vigorously and powerfully when hooked. They can burst into a surge, displaying high-speed runs and jaw-dropping aerobatics leap, or dive deeper into the sea, over and over again in a bid to escape.

The two main subspecies of sailfish, Atlantic and Indo-Pacific, range throughout the warm and temperate parts of the world’s oceans. They generally have a tropical distribution and are particularly abundant near the equatorial regions of the Atlantic, Pacific, and Indian Oceans. In the western Pacific Ocean, the Indo-Pacific sailfish migrate annually to higher latitudes in the East China Sea during summer and migrate southward in autumn for spawning. They appear to follow oceanic currents with surface seawater ranging in temperatures between 25° to 30°C. 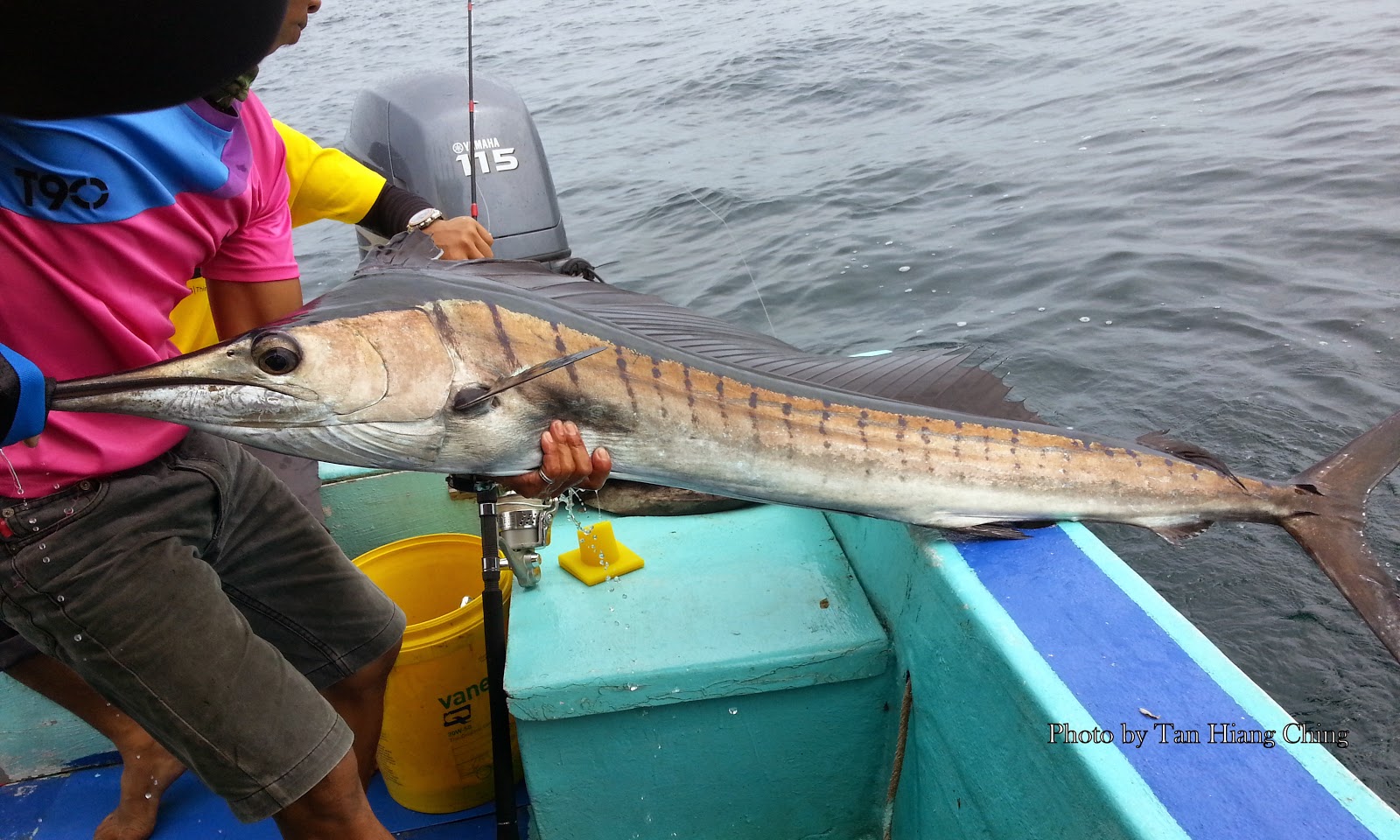 Sailfish start out as tiny larvae, no more than a few millimeters in length, but grow rapidly during their first year to between 1.2 to 1.5 meters (4 to 5 feet) long. Females tend to grow faster than males and reach sexual maturity sooner. After the first year, growth rate decreases. They have an estimated maximum lifespan of 13 to 15 years. Generally, sailfish do not grow to more than 3 m (10 ft) in length and rarely weigh over 90 kg (200 lb). Trophy specimens of Indo-Pacific sailfish have measured up to 3.4 m and weighed as much as 100 kg.

Their fusiform body is long, compressed, and remarkably streamlined. Like their relatives, the swordfishes and marlins, their upper jaws juts out well beyond their lower jaw and end in a sharp, protruding bill. They are blue on top and white below, with rows of light blue dots. Controlled by their nervous system, they can change their colours almost instantly. They can rapidly turn their body light blue with yellowish stripes when excited, confusing their prey and signaling their intentions to other sailfish. Their large first dorsal fin is usually taller than their body and runs most of the length of their body. The dorsal fin or sail are normally kept folded down and to the side when swimming, but it may be raised when the sailfish feels threatened or excited, or is herding baitfish. When spawning, females swim slowly with their dorsal fins above water, accompanied by one or more males. 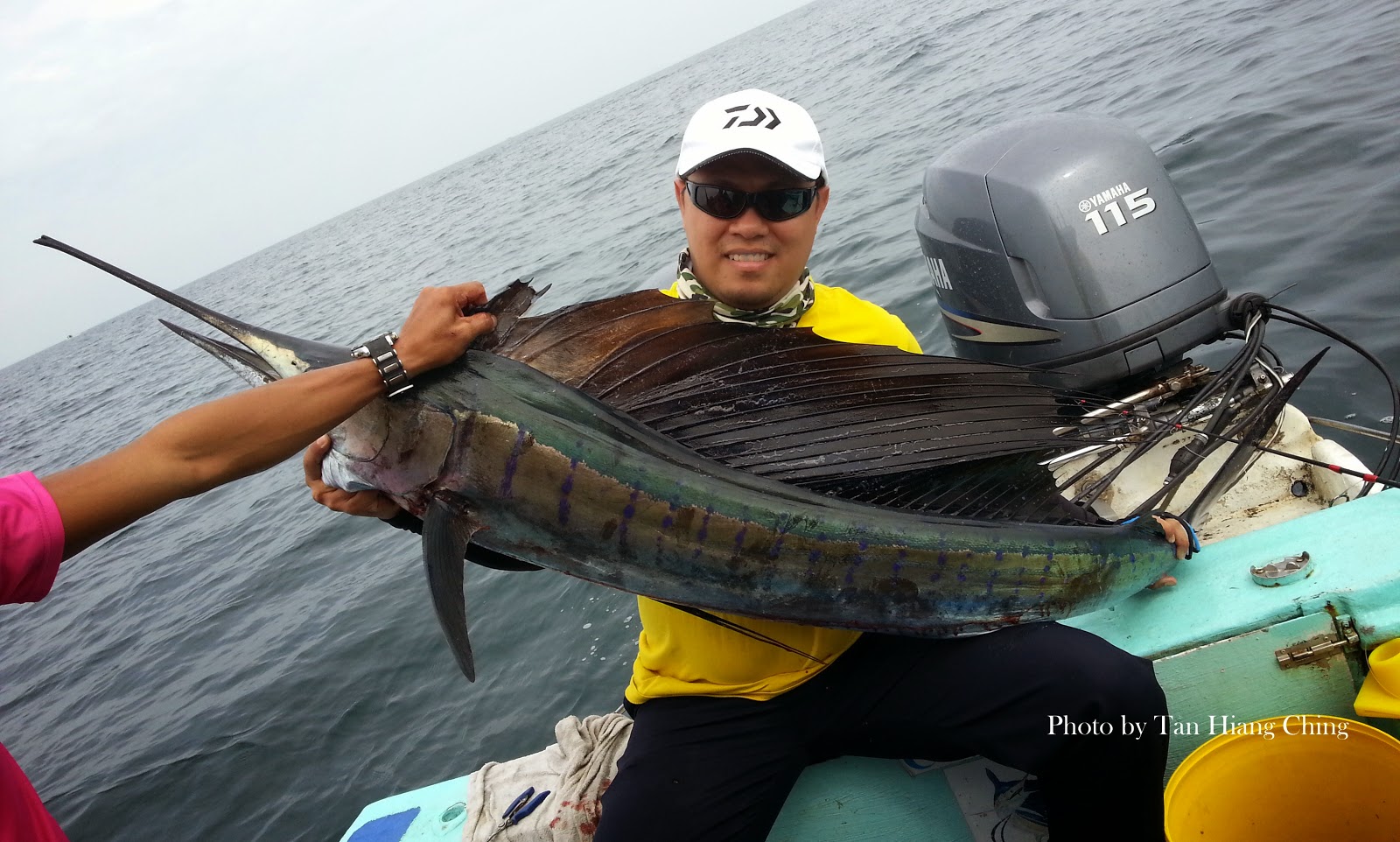 
Adult sailfish are top predators in the open ocean. They are not eaten by anything other than larger predatory fish like open ocean shark species, orcas and dolphinfishes. They are opportunistic feeders and eat whenever possible. They feed on schools of smaller fish like sardines, herrings, mackerels and anchovies. They also feed on squid and octopus. They feed during the daytime hours when the sun provides enough light for their vision to function at depth. As available light and the wavelengths outside of the blue-green-violet shades decrease rapidly with depth, sailfish remain in the upper surface mixed layer, sometimes as shallow as 10 meters, a vast majority of the time. They only undergo deeper excursions for short periods to depths up to 350 meters to find food and almost always during the daytime when light is at a maximum. They are active between 06:00 and 18:00 hour local time when the sun is above the horizon. When the light intensity decline, their activity also decline. During full moon they are active at night, with a peak coinciding with the peak of moonlight intensity between 21:00 and 22:00 hour. Sailfish catch statistics reveals an increased number of catches and raises between 09:00 and 14:00 hour.

Sailfish usually forage in team. They start by chasing schools of fish and gradually split large schools into smaller ones. They erect their sails to corral their prey and tighten them into a ball shape school near the surface of the water. Then they use their bills to hit the prey by tapping or slashing at them. They always take turns to attack, presumably to avoid injuring each other with their sharp bills. The tip of the bill can cover 6 meters and turn through 575 degrees in a single second which is much faster than the baitfish reflexes. The injuries that sailfish inflict on their prey reduce their swimming speed and become easy to be grabbed by their mouth. 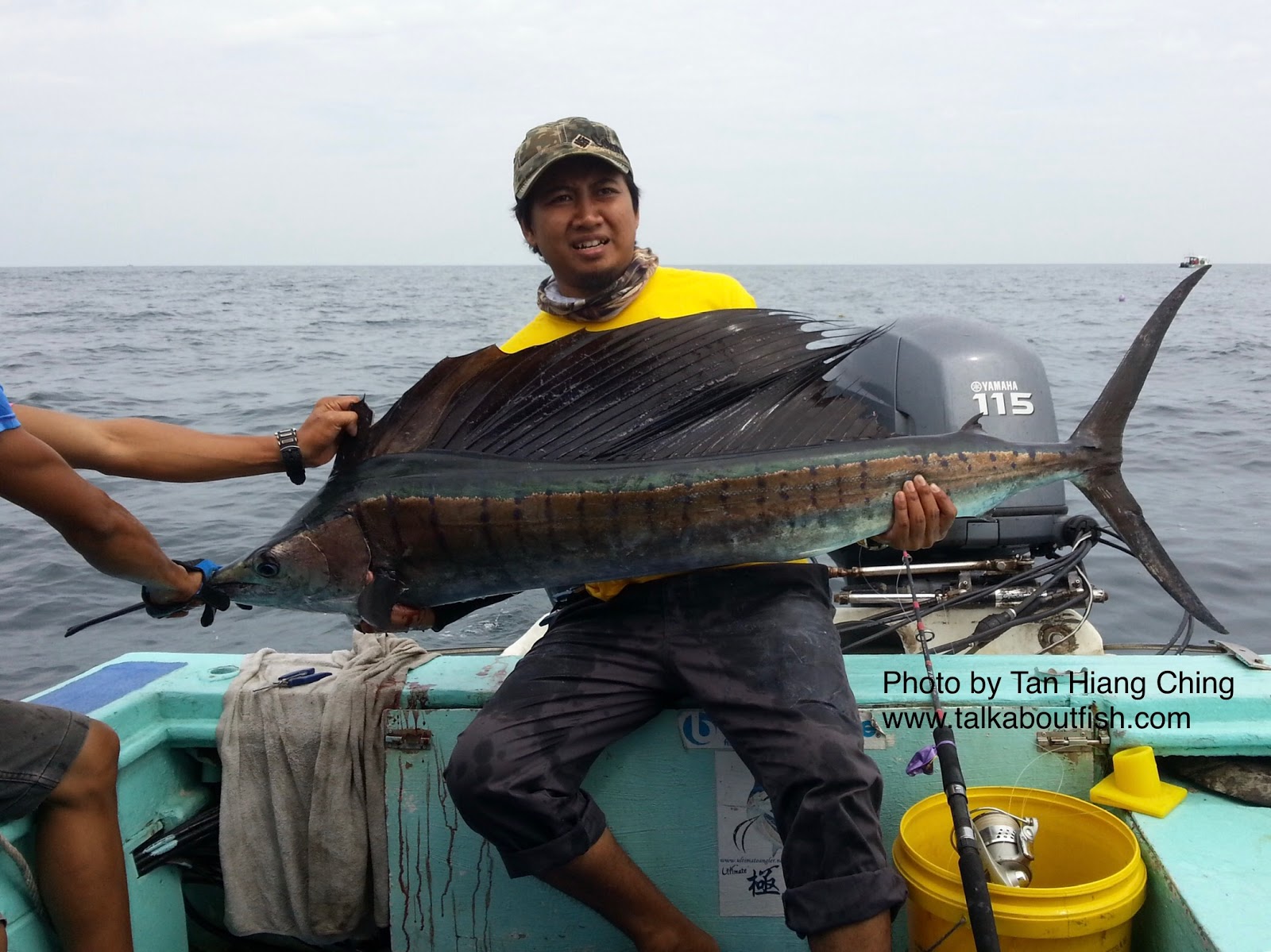 
Sailfish can be caught using a variety of techniques including drifting, trolling, popping, casting, jigging and fly fishing. Drifting using live bait of mackerel, scad, sardines and shad on surface or mid water is the technique most often used in Malaysia. The hook is pierced on the body near the upper fin of the baitfish, and released back into the sea with a balloon tied to the mainline to maintain a certain depth. The struggling motion of the baitfish would attract the sailfish. The drag for the fishing reel must be set loose enough to allow the fish to run without breaking the fishing line. Watch out for a light tap, followed by a sudden jerk and a quick run.

Once hooked, they will dash and pull the line hard and fast. The fish would take several dives and mount multiple runs. It would also jump, tail-dance and dive back into the water in its attempt to dislodge the hook. Keep the line tight enough and do not over tighten reel drag to avoid line break. Many fish are lost when tightening the reel drag during a fight with ferocious surface predators especially when the line are almost finishing and many lost due to slagged line.

The key of a good tackle setup for sailfish is a soft enough fishing rod (with good lifting power if possible) to keep the line in tension while the fish attempt its acrobatics and more than 250 meters of line to allow the fish to run to tired them down and quickly pumping and reeling them in before they run again. Higher PE rated rod and line are preferred to be used for catch and release because the longer it takes to land the fish, the higher the chances of the sailfish to die of exhaustion or being snatch by other predators. When specifically targeting sailfish, use 40 lb to 60 lb leader attached to a 30 lb or 40 lb mainline. Carbon barbless circle hook is used to allow the hook to disintegrate with the sea water if the sailfish is released back to the wild without the hook removed.