Snake eels or worm eels are members of the Ophichthidae family. They are found in all tropical to warm temperate waters. They have a tubular snake-like body with tip of tail often hard and pointed. Their branchial region are reinforced by numerous branchiostegal rays. The Ophichthidae family are divided into 2 subfamilies. The subfamily Ophichthinae is distinguished from all other eels by their hard, pointed, finless tail tip. The subfamily Myrophinae have a caudal fin. They are distinguished from other eels by the presence of a median pore in the transverse frontal canal on the head.

Snake eels spend most of their time buried in sand and hunt their prey by sense of smell. They are coastal marine fishes but sometimes enter rivers. They swim by moving the body in S-shape, like a sea snake. They feed on a variety of bottom-living fishes and invertebrates.

There are 59 genera and about 311 species of Ophichthidae worldwide. Malaysia has 3 genera and 6 species. 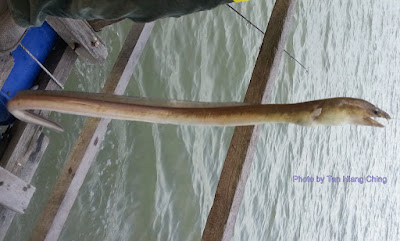