Climbing gouramies or climbing perches belong to the Anabantidae family. They are distributed in Asia (India to Philippines) and Africa. They have a relatively large mouth with fixed conical teeth on jaws, prevomer, and parasphenoid. They possess a labyrinth organ, a structure in their head which allows them to breath atmospheric oxygen.

Climbing gouramies are primarily freshwater fishes, rarely go into brackish water. They mostly inhabit rivers, canals, lakes, ponds and swamps. Most of them are carnivorous. They can be seen gulping for air on the surface of water or crawling on wet and dry surface.

There are 4 genera and about 31 species worldwide. Malaysia has only one species. 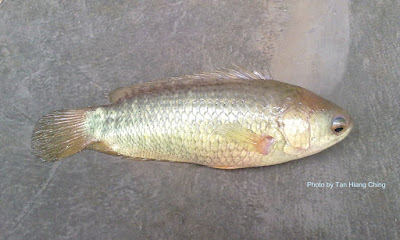