Chimaeras, ratfishes and ghost sharks are the common names for the members of the Chimaeridae family. The family members are distinguished by having short and rounded snout, erected first dorsal fin with a strong spine, broad pectoral fin, and long second dorsal fin. They have long and pointed symmetrically tapered upper and lower tail lobes. Male chimaeras have head clasper located somewhere in between their eyes to aid in holding the female during mating. Similar to sharks and rays, they are cartilaginous fish, with no bone in the skeleton, no bony fin rays, and no bony plate scales. However, unlike sharks and rays, they have only 4 pairs of gill openings on the sides of the head, which are hidden by a pair of soft gill covers. Their dorsal spines are venomous.

Members of the Chimaeridae are found in both tropical and temperate waters of the Atlantic, Pacific, and Indian oceans, mostly below 200 m. They feed on bottom invertebrates and small fishes, which are crushed or cut up by their tooth plates. 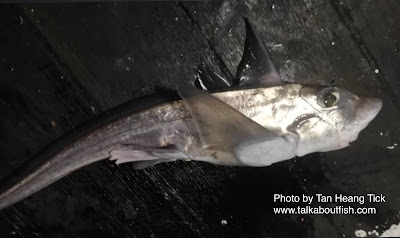